It’s quite amazing how so much work goes into building the main object, the mold and all its parts to simply create a cast from a blend of 2 liquids that take roughly 10 minutes to cure. The effort of labor is disturbing unbalanced. Although it is nice to get a break every once in a while and find something that works so well will so little effort. Slush casting is my new best friend.

This entry includes the second cast, and how I went about making it once I understood how to really use the casting mix. I also might add at a later time the other casts I plan on pumping out. I decided to remake the visor template for the vacuum former as well. This revealed some flaws that needed to be cleaned up. So Ill start with that.

Before I put the bottom back on and started on the second cast the same way I wanted to see how the mix actually worked. So I decided to rebuild the base for the visor. Since it was only for a small section of the helmet and I didn’t want to waste material doing an entire helmet for just the visor, I used small portions and slowly added more as needed. 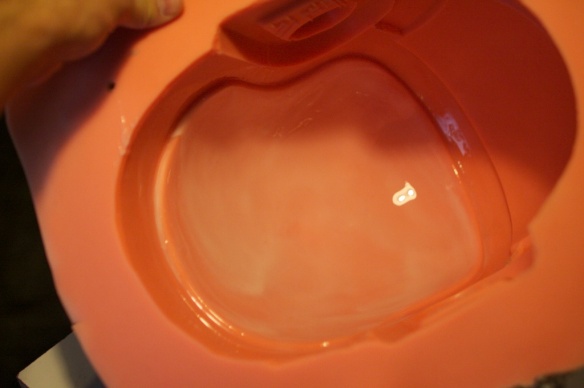 I think I did about 3 coats to this and pulled it.

Once it was pulled, I used my Dremel cutting and sanding away the edges that weren’t needed. I noticed a number of smaller imperfections in the surface of the visor. Small as they were, they were still noticeable and could show up in the vacuum form, so I decided to go through and bondo, paint, and define them more clearly. 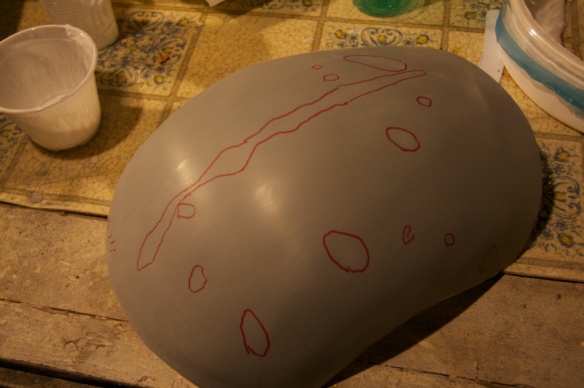 So back to bondo – good thing I kind of like the way it smells. Luckily these small indentations dont require a lot and can easily be filled and sanded down.

When I did the first run through with the casting material, I was unsure how best to use it. And used a large amount of the liquid by just testing. If you noticed in the third update the large plastic cup full of the stuff. It was nice and easy to get it to cover the interior of the mold at first and you can hear it sloshing around, but it doesn’t really start to lose it viscosity until after about 7 minutes. At which time I was exhausted and had already put the damn thing down. I was able to get good coverage but it still oozed a little and pooled a bit on the bottom where it sat.

After making the cast of the visor, I had a much better understanding of the mix.

So in response and not wanting to waste the material where it wasn’t needed (like the visor and the backplate) I went about the second cast more meticulously. I started by cutting the hole in the bottom board much larger so I could work the interior better. I also cut away some of the unnecessary excess mold on the interior that defined the bottom of the helmet. you can see this in the first couple of images of this post while exploring with the visor remake.

I marked the bottom roughly where the back of the cast didn’t need material, so when sloshing the mix around I didn’t have to move beyond a certain angle. unnecessary but useful nonetheless.

The first thing I went about doing was filling the ears pieces as best and efficiently as I could. Since I have a limited amount of material to work with currently I wanted to get the most out of it. I don’t need to fill the smaller part of the ear where the EKG symbol will fit, so I used a smaller plastic cup and placed it inside.

This allowed me to fill the sides of that smaller part, cover the details of the laser cut bits, and fill the rest evenly. I did this with both sides and am pretty happy with the results.

I went about filling the rest of the ribbing slowly with small portions of mix one section at a time. Eventually applying a number of coats and getting a thick enough cast to pull. After which I pulled the base. Here you can see how I tried to only fill the ribs and leave the areas exposed that didn’t need to be covered. Although you can’t tell here, and it may look like a mess, I did a pretty decent job minimizing the amount of mix on the unwanted areas.

It felt sturdy enough so I started to peel the mold away. I am glad I went about making this second mold. Its held up great. 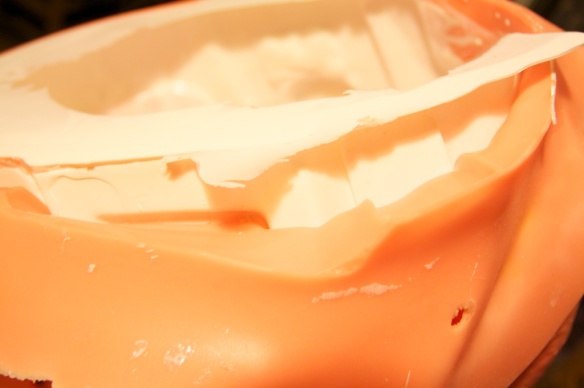 This reveal was very satisfying. Most of the details came through very clean with only a few minor flaws. All easily remedied. After I got the mold off I set off with my Dremel again clearing and cutting away the edges that were not needed. Here are a couple of shots of the second cast and the edges after being cleaned up.

In the background you can see the visor cast i am filling in. I hope to get this finished first before everything else so I can play with the tinting material.

I left a few little lips so I had something for the visor to sit on and attached to. Whether those will stay is an entirely different story. In the future casts I will either make tabs or leave the entire lip. Haven’t decided yet. Guess we will see how well these work out.

Its fairly light in weight, and even though I applied a number of coats to the cast, I might go about filling in the thinner areas at a later time to help thicken it up and add a little weight. This shot below shows some of the thick and thin areas. Even the thinner areas are still fairly sturdy and rigid.

Although not perfect, I am pretty happy with this cast and eager to set off getting the next one rolling. I stole the other visor and put it on this cast to see how it looks. I need to finish up the smaller indentations in the visor cast before I start making those.

This visor was made with an older mold. It has a bit of excess plastic on it and sits on the outside because of this. The newer ones will fit snuggly with any excess on the inside of the helmet. That should be included in the next update. 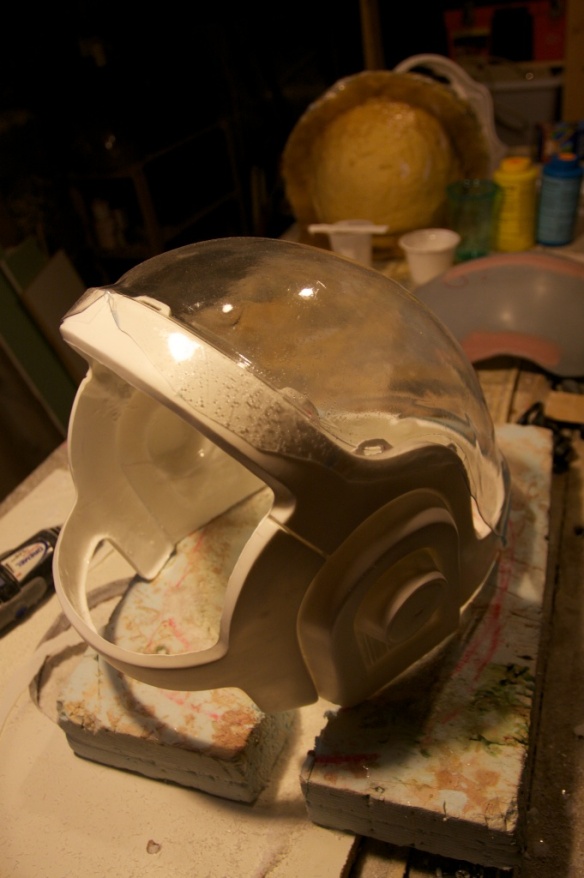 I will be going out of town for a few weeks and wont be able to work on it, so things wont be updated until early April. Thanks for reading and checking out my progress. Stay tuned for new updates. I will also be starting another project when I return which will go nicely with this helmet…